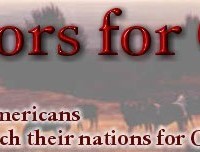 Welcome to Warriors for Christ Online

“Welcome to Warriors for Christ Online!  Our goal is to encourage and strengthen spiritual growth among Native Americans through evangelism and discipleship training, and to strengthen and plant Native churches on Indian reservations and urban areas throughout North America.

Our goal for this website is both to arouse in the hearts of Christians the need for Christ among the Native Americans, and to tell others about our ministry.”

Brings to mind this from Howard Zinn’s “Voices of a People’s History of the United States”:

“The Christians with their horses and swords and pikes began to carry out massacrers and strange cruelties against [the Native Americans]. They attacked the towns and spared neither the children nor the aged nor pregnant women nor women in child bed; not only stabbing them and dismembering them, but cutting them to pieces as if dealing with sheep in the slaughterhouse. They made some low wide gallows on which the hanged victim’s feet almost touched the ground, stringing up their victims in lots of 13, “in memory of Our Redeemer and his Twelve Apostles,” then set burning wood at their feet and thus burned them alive.

When tied to the stake, the Casike, or Chieftan, Hatwe, a very important noble, was told by a Franciscan Friar about the god of the Christians and of the Articles of Faith, and he was told what he could do in the brief time that remained to him in order to be saved and to go to Heaven.

The Chieftan, who had never heard any of this before, and was told he would go to Hell where, if he did not adopt the Christian faith, he would suffer eternal torment, asked the Franciscan friar if Christians all went to Heaven. When told that they did, he said he would prefer to go to Hell.”