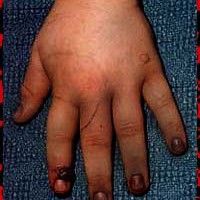 I dreamt last night that I was doing something on the farm with my dad and his hired man (who was not, in fact, my dad’s hired man, but instead a huge fat guy who seldom spoke), and somehow my hand got cut off. I kept telling my dad it was no big deal, that I was fine, but he was quite upset.

Then . . . I think it’s like I wake up (in the dream, that is) to find that I’ve got a replacement hand — a real human hand, but it’s not mine. The hand is fat and old, with huge thick fingers covered with callouses and a puffy boil on the palm, and the fingernails are black with dirt and chopped short, deep into the tips of the fingers. In short, it’s sort of repulsive, and it’s like the fingers are so fat I can’t really bend them very well or make a fist or anything, and it feels really strange because it’s so different from my left hand — but, it works.

Turns out the hired man gave me his hand. Just volunteered to have his amputated and donated it to me. He’s got his left stump wrapped in cloth. Says, since he’s left-handed, he didn’t really need it that much anyway, or something.

He’s getting in the back of a truck to go home (?), and I can’t stop thanking him — I think I hug him, too. Then my dad and I start arguing about the Iraq war, and I get really pissed off and start ranting and raving at him about it . . . This seems to upset the hired man, and I think maybe he’s going to ask for his hand back. But he doesn’t say anything.

And that’s all I remember.