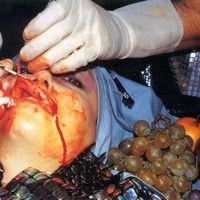 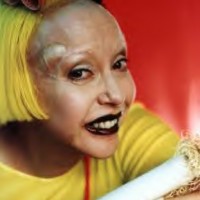 “
Since 1990, Orlan has been undergoing a series of surgical procedures entitled “The Reincarnation of Saint Orlan,” which are staged in theatrical surgery suites and performed and accompanied by spoken word and live music. Over the course of these operations, Orlan has transformed her physical appearance into a “composite auto-portrait” with features from famous female figures in Western art history: the chin of Botticelli’s Venus, the lips of Gustave Moreau’s Europa, the eyes of Gérôme’s Psyche, and the brow of Leonardo da Vinci’s Mona Lisa.

In the surgical act, the drawings upon Orlan’s face are quickly and dramatically replaced by incisions that are both clinical and creative, as the surgeon breaks down and reconstructs a new physical appearance in accordance with an artistic and psychological construct of beauty. The graphic images of her face being sliced open with scalpels and pierced by needles are shocking and unsettling to many, dramatizing the extremes to which women will go to achieve the elusive ideal of feminine beauty that is ultimately unattainable and even horrific. Orlan intends to shock, challenge convention and provoke discussions of taboo issues, for, as she states, “Art can and must change the world, for that is its only justification.”
“

“
The French performance artist whose assumed name is Orlan has embarked on a campaign of self-transformation through plastic surgery. The photo-documentation of her operation/performances furnishes both the imagery and the financial support for her art. Below, the author grapples with the many issues raised by a body of work that gives new meaning to the term “cutting edge.”
”
[ link ]