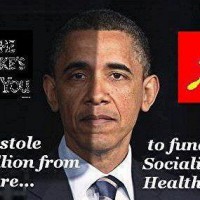 A recent study determined that conservatives are more likely to make up facts to justify their beliefs, and this image is proof positive of that.

The underlying issue here is that conservatives have such an aversion to the facts that they’re completely willing to overlook them in an attempt to make a salient point. It doesn’t matter if their claims are baseless, as long as they get the chance to throw out the word “socialism” to scare people.