Ah, how grand it is to hear this on a semi-weekly basis — especially from the mouths of children.

Recently I noticed that my niece kept trying to over me cheese all the time. Every time we were at their house, “Here, eat this cheese.” “Hey, try this cheese!” “Hey, dustin: try this cheese and see if it’s bad.”

“No, that’s o.k.” would not suffice as a response.

Things came to a head when my step-daughter Abbey put a bunch of cheese in my cereal. Naturally, I responded by placing several chunks of cheese in the chicken-noodle soup that she had just warmed up. She was so annoyed and revolted that she refused to touch the soup, threw it in the trash, and berated me. My bemused laughter at her only made things worse…

Eventually I found out someone had told her that eating dairy products is supposed to make smoking taste bad, afterward — so she was actually just trying to help me quit smoking.

While this explained a great deal, all I could think was, “No, actually, if I eat some cheese, I’m just going to think, ‘Well, I’ve just had a meal: time for a cigarette.'”

Occasionally, printers will run disposable sheets of paper through the press several times in order to fine-tune the press, or to clean the rollers. The resulting “setup sheets” often display random overlays of images and type from various unrelated print jobs.

A great resource for those of us who cannot afford a real Rauschenberg, setup sheets have long been admired and collected by graphic artists for the happy incidents that adorn them. In fact, certain recent designs could be described as software-assisted attempts to recreate that fortuitous look. Here are some examples from my collection, which I hope you will enjoy. 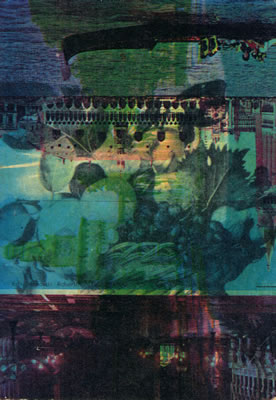 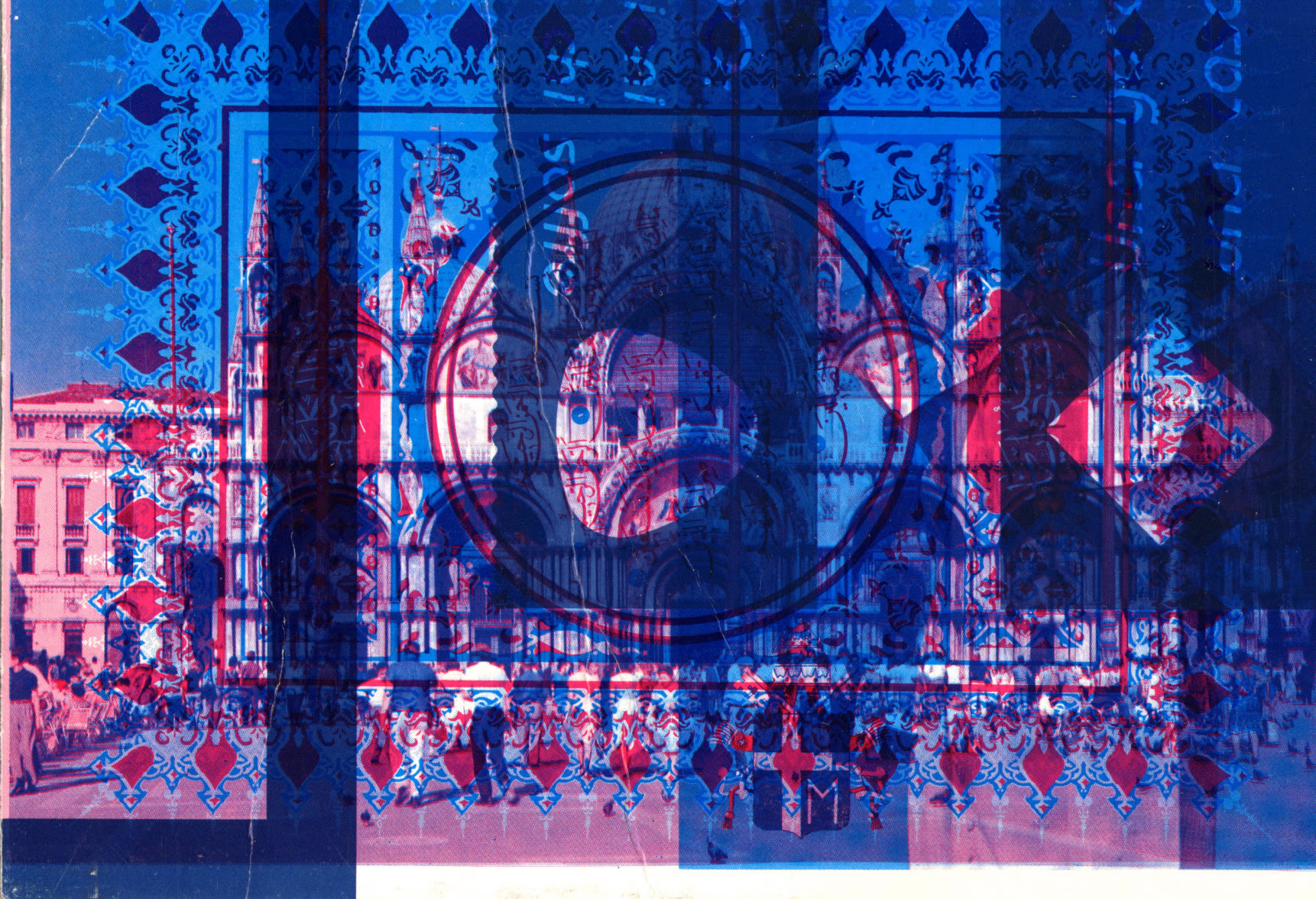 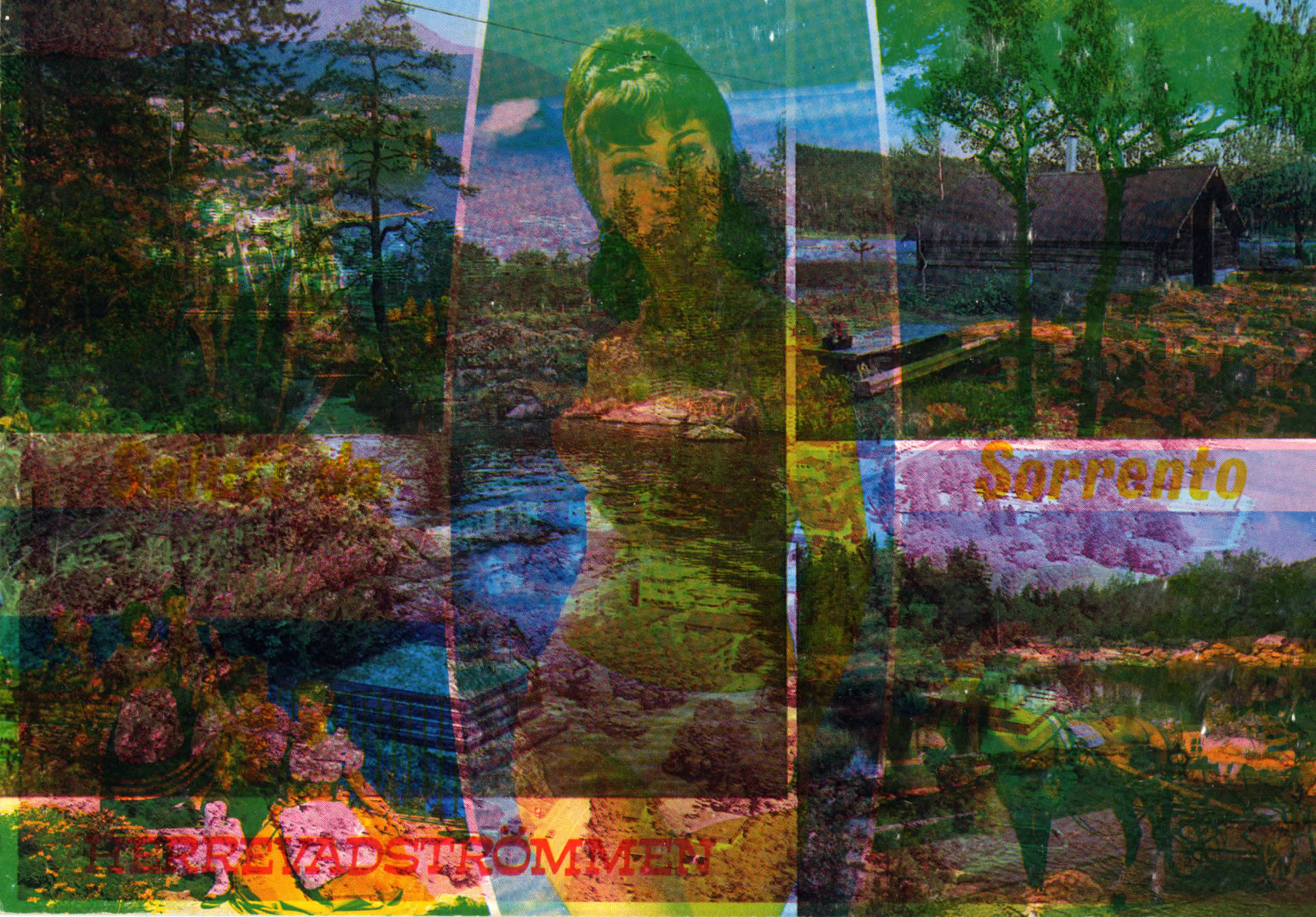 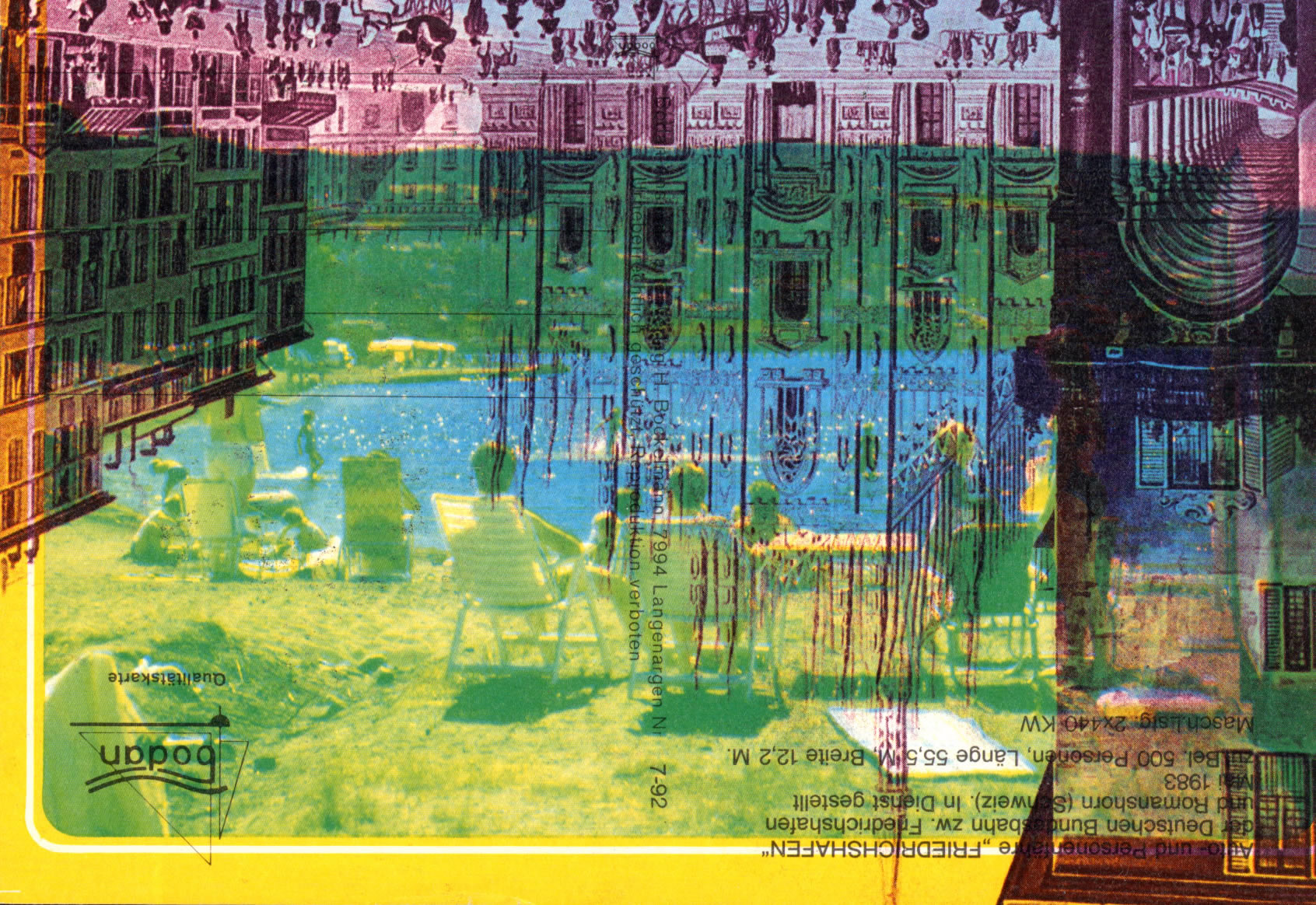 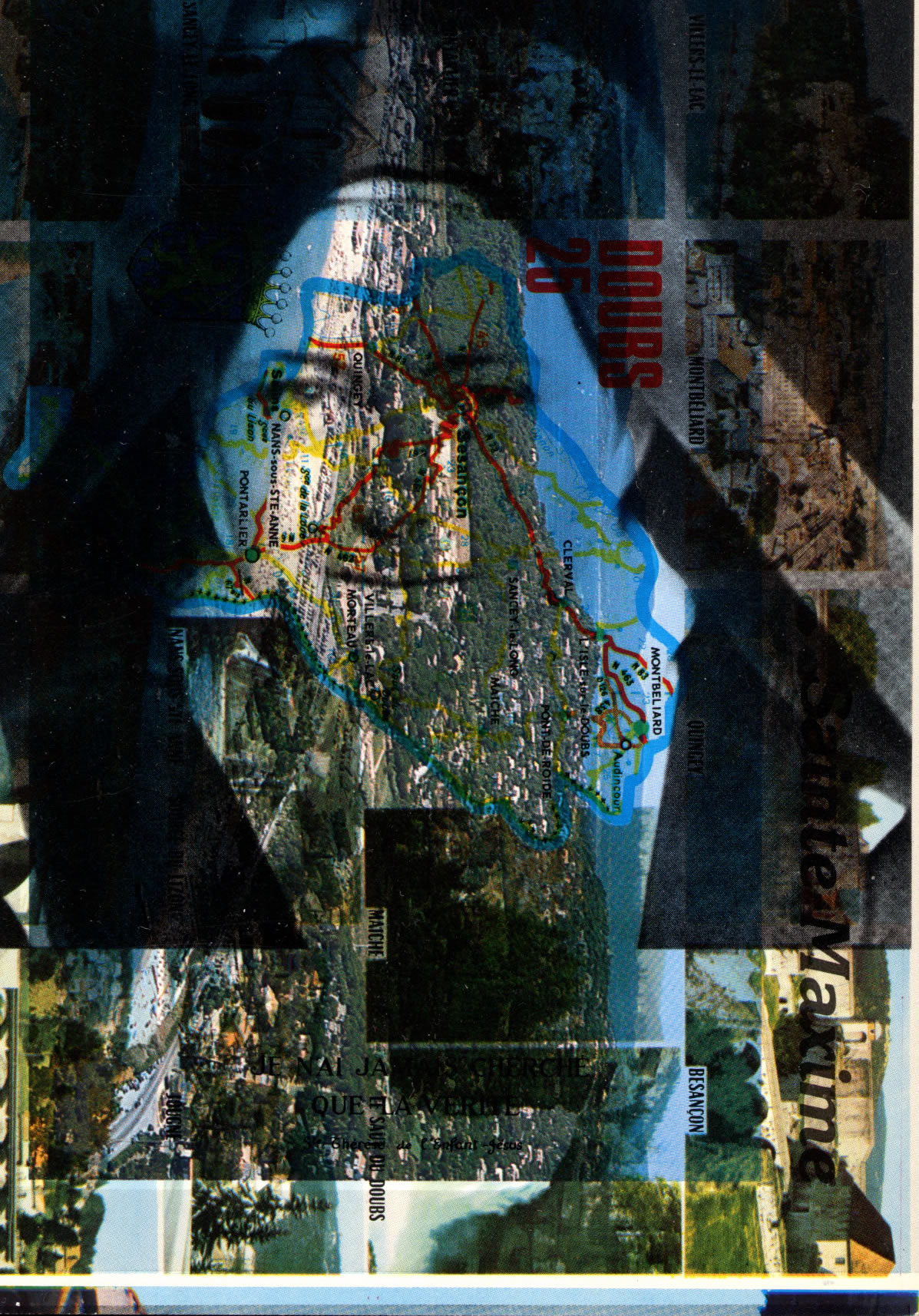 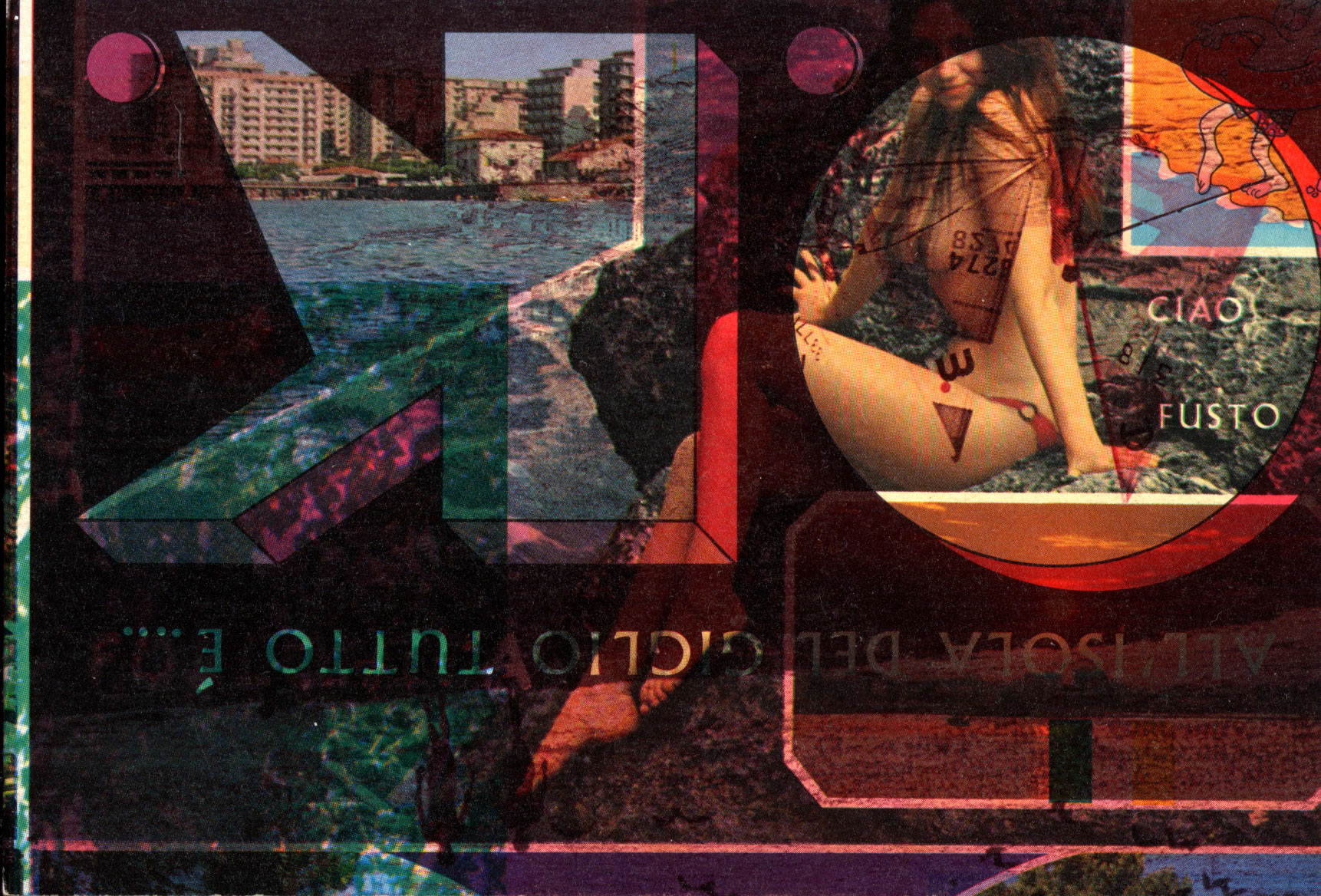 Starting to get into music again. A new track for your listening pleasure.

(Other recent stuff — recent being in the last several years, I guess — can be found here.)

( Some great Flash art — a little cumbersome to navigate at first, but just click, drag all the way to the top and then hold it there. )

( I’ve found this image comes in very handy for almost any PowerPoint presentation. )

I have no words to express how awesome this is — ( “awesome” in the literal sense, not in the “awesome like a hot dog” sense or the “Hey, you got red and yellow socks? — They’re awesome!” sense. ).

In all honesty, this impresses me more than the Sistine Chapel.

MUTO a wall-painted animation by BLU from blu on Vimeo.

Thanks to c. george for sending this to me.

*I realize this is a huge file, and this will only interest you if you are a member of my immediate family; if you are not, feel free to disregard. Thank you for your time.

And have I mentioned how grateful I am to have a fucking job? Answer: really fucking grateful.

Not that being unemployed doesn’t have its perks. Like, umm…. Well, o.k., “perks” isn’t really the right word… Maybe… “quirks”…

Such as this little episode, which I was recently thinking about…….

So you know how it is when you’re on your last dollar and wondering how you’re going to make it ’til the next paycheck? Or, rather, how you’re going to make it until the next loan or miraculous discovery of a bag of money? And you’re digging through the pockets of all your old coats and pants and pulling up the cushions of not only the couch but every chair in the house in search of enough change to buy a loaf of bread and maybe a 2-liter of Coke and — if you really dig — a pack of cigarettes?

Well, on this particular occasion, we didn’t find enough change to buy a Snickers, let alone a pack of Luckies. (I think we had already resorted to the desperate nickel and dime search earlier in the week.) And we desperately needed to put gas in the car in order to get to work the next day and etc., lest our situation become all the more desperate….

The logical question that comes to mind in this situation is: What do I have to sell?

Once in a while I’ll realize I actually have a lot of unnecessary electronic equipment lying around — extra hard drives full of digital video — mainly recordings of CSPAN and History Channel that will never be watched, from back when I had a Tivo-type-thing for my computer. A few minutes on CraigsList and I’m in the money! (Not MUCH money, mind you, but enough to eat.)

No such luck this day. Aside from selling my computer — the sole source of income for me at this point (I was scraping together a few bucks here and there doing freelance graphic and web design — on those rare occasions when people would actually pay me…) — or my car — actually, no, we had already sold that… Or my kidneys…..

The next obvious thing to sell, of course: CDs and DVDs.

After all, you can’t whine about being broke when you’ve got a stack of these taking up space on your shelves. (The shelves themselves, of course, would be the next thing to be sold…)

Fortunately, there was a little independent music shop near our apartment that bought and sold used albums — not for much, of course, but when you’re desperate and hungry, $2 for a CD you haven’t listened to since Bush’s pappy was in the White House seems pretty damn good. (By the way, that’s not meant to be a comical hyperbole, but an accurate estimate.)

So we begin the search: finding those 5 or 6 CDs and/or DVDs which A.) do not suck, and B.) [this is the really tricky part] do not look like they’ve been used as cat toys, coasters, and/or hockey pucks.

Most of the CDs I still possess are somewhat rare and obscure — which is why I haven’t ripped them into iTunes and sold them already. So I’m hesitant, but… well, I’m desperate.

So I toss them all into a paper grocery sack and head to the local record shop — a hippy-ridden store called “Know Name Records” in which the reek of patchouli is so pungent that you will literally choke from the god-awful smell upon exiting your vehicle in the parking lot. Once actually IN the store, well, god help you. (Let’s just say you don’t want to browse the racks without a gas mask…)

I pretend to browse for used CDs while waiting for the hippy behind the counter to examine my wares and determine their resale value.

These are my rarest and most valuable CDs! I’m selling these only out of sheer desperation! Don’t you underSTAND?!

“Those fucking hippies have no goddam taste in music,” I say as I (thankfully) return home.

“They didn’t buy ANY of them?”

All is not lost, however: there’s another local music store, “The Electric Fetus,” which sells all sorts of great and eclectic music, including lots of local bands, and also buys and sells used CDs. I KNOW they’ll buy my John Zorn and Secret Chiefs 3 and Mike Patton and my Miles Davis box set… The only question is: Do we have enough gas to get there?……..

It seems extremely unlikely. When that little “out of gas” light on the dash starts flashing, you have to ask yourself: “Do you feel lucky, punk? Well? DO ya?” There could be a gallon in there, or there could be just fumes — it’s difficult to say……..

I remember that I have a couple secret boxes downstairs filled with random stuff — old rolls of undeveloped film, notes and post cards from years ago, keep sakes and suchlike…. I rummage……..

Shit is lookin good. All I have to do is buy some gas with this, then head to the “Electric Fetus” and sell my wares, then use that money to buy some more gas, and we’re SET (for a day or two, anyway…).

With great optimism I head out the door.

For some reason I suspect that paying with Canadian currency might cause trouble. So I decide to go to the nearest gas station I know of where you can pump the gas first, THEN pay. I put in less than $5, and head inside.

They do not accept Canadian currency. FUCK.

The guy next to him seems as confused and annoyed as I am: “Seriously? We don’t?”

“Nope, says right here.” (Pointing at a little note taped to the counter.)

“But it’s worth more than American.”

“If there’s still a bank open…”

“I mean I’d leave this, obviously.”

Finally he agrees that if I leave the Canadian $5 bill, I can leave and come back later with some REAL money, and then we’ll set things right.

Thing is, there IS a bank open — a Wells Fargo, and they’re less than a block away. I run over there, confident now that things are gonna work out…

Turns out, they do not exchange Canadian currency.

That’s right, you read that correctly: the FUCKING BANK will not exchange Canadian currency for American currency.

Why? Don’t bloody fucking ask me. They just don’t.

At any rate, at that point all I could do was head for the “Electric Fetus” as fast as I could, sell my shit and get back to the gas station before they closed to set things right and not have my license plate listed with the “fuzz.” (As I call them.)

As luck would have it, the good folks at the “Electric Fetus” paid me top dollar for my obscure bizarro music, and I walked out of there with over $30. Bought some gas, bought some smokes, even bought myself one of those awesome Mom’s egg salad sandwiches from the cooler to kill the hunger pangs.