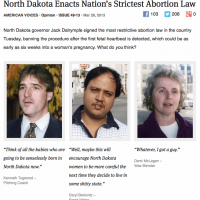 Finally a lawmaker offers the appropriate response to the relentless crusade by Personhood USA to declare fertilized eggs legally equivalent to adults.

Oklahoma state Senator Constance Johnson introduced an amendment to Senate Bill 1433. The bill seeks to define human life as beginning at the moment of conception, before it is even implanted into the womb. Like all other personhood measures, this one would afford that homeless cluster of cells full and equal rights under the law. In the words of SB 1433 “the unborn child at every stage of development (has) all the rights, privileges, and immunities available to other persons, citizens, and residents of this state.”

Johnson’s response was to offer the “Every Sperm Is Sacred” amendment which would have added the following language:

However, any action in which a man ejaculates or otherwise deposits semen anywhere but in a woman’s vagina shall be interpreted and construed as an action against an unborn child.

Finally! Someone has the courage to introduce language that is just honest about the outright contempt for women driving Republican politics these days.

Johnson later voluntarily withdrew her amendment, but not without letting colleagues know it was the sexism behind the push for personhood that motivated the amendment.

And as if to prove Johnson’s point on the misogyny driving personhood bills, another pro-choice legislator Jim Wilson (D) tried to add an amendment to the bill that would require fathers be held financially responsible for the woman’s health care, housing, transportation, and nourishment while she was pregnant. It seems only fair. After all, the state is coercing her pregnancy.