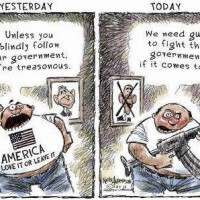 [ via: http://www.facebook.com/OccupyTheNRA ]
http://current.com/shows/viewpoint/videos/john-fugelsang-benghazi-hearing-proves-republicans-suffer-from-selective-amnesia/
“
See, way back in the foggy mists of 2001, the GOP told us it was treason to ever criticize a president following a terrorist attack. So how is it possible that in 2012 the Democratic president should be impeached for not acting quickly enough when our overseas consulate was attacked, while in 2001, a GOP POTUS who sits numbly in a nursery school classroom as the nation is under attack is somehow more manly than John Wayne freebasing AndroGel?
Well, the brain that accepts this has the attention span like the guy from “Memento.”
…
But good news, congressional Republicans — Barack Obama has heard your complaints he didn’t do enough when the Benghazi attack was in progress, and now in the event of another terrorist attack, the Secret Service is authorized to give the president a copy of “My Pet Goat.” That’s today’s GOP: Come for the hypocrisy, stay for the misogyny.
“