To emerge from bankruptcy, the companies unions agreed to large concessions which these vulture capitalists demanded, cutting thousands of jobs, transferring benefits or cutting benefits entirely. The companies also agreed to modernize the factories, which were running at a loss due to the age of the equipment, some of which dated to the 1930s. The investments from Silver Point and Monarch were to go towards this modernization. Instead the company found itself saddled with even more debt. To add to the company’s woes, the holding companies stopped supporting the retirement fund, raiding it for easy cash to extract from the firm. The current estimates put the liabilities of this fund at over $2 billion currently.

In order to “save” the firm, the operators of the company turned to the unions, which had already surrendered huge concessions just a few years back to turn the company around, and demanded an across the board slash, an additional 31%, along with eliminating the retirement and benefits entirely. It was a bridge too far. The union went on strike, and now the company has declared it will be liquidated.

Of course the right-wing media is quick to blame the unions, but in the end the union members would have lost more if they had capitulated to the vulture capitalists demands. By this move, they can hope to salvage the retirement plan, while if they’d given in they would have lost it all. $2 billion is a lot of money to just “give away” in negotiations. Of course the unions were expected to surrender despite the fact that the management company was asking the bankruptcy court to give their outgoing CEO up to $5.5 million. All of this was in addition to the 80% raises the executives were being treated to. 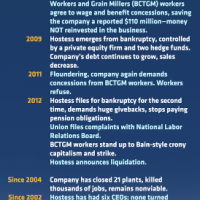 Aside from which he DID save the economy which THEIR policies had destroyed and which was hemorrhaging 750,000 jobs a month when he took office.

Aside from which these Repugs do everything in their power to BLOCK anything Obama & the Democrats try to do to create jobs.

Aside from which they ran (and got elected) on promising that THEY would create jobs.

Aside from which they are shameless fuckers. 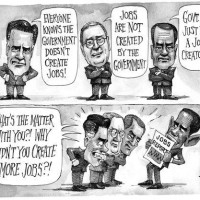 Senate Republicans on Thursday blocked the No.1 item on the president’s congressional “to-do-list,” refusing to allow a vote on a bill that would give tax breaks for companies that “insource” jobs to the U.S. from overseas while eliminating tax deductions for companies that move jobs abroad.
“
Who is voting for these wankers???
http://www.cnn.com/2012/07/19/politics/senate-bring-jobs-home-bill-blocked/index.html?c=&page=0