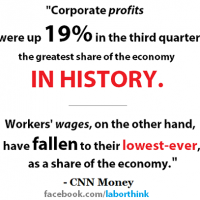 The world’s richest woman, Australian mining tycoon Gina Rinehart, said her country’s mining industry couldn’t compete with nations that are willing to pay workers less than $2 a day for their sweat and labor.

The implicit suggestion: Employers should be free to pay workers whatever they please.

This echoes Rinehart’s earlier to-do list, in which she urged Aussie lawmakers to cut the minimum wage so that, well, she wouldn’t have to spend so much money on things like workers’ salaries and benefits.

“The evidence is inarguable that Australia is becoming too expensive and too uncompetitive to do export-oriented business,” Rinehart said at the Sydney Mining Club. “Africans want to work, and its workers are willing to work for less than $2 per day. Such statistics make me worry for this country’s future.”

Yep, it’s getting harder and harder to be a job creator.

Rinehart knows what it means to pull yourself up by the bootstraps. She inherited a fortune now estimated to be worth about $18 billion. That’s a heavy burden to bear.

Yet, inexplicably, Australian Prime Minister Julia Gillard didn’t take Rinehart’s advice in the generous spirit with which it was offered.

“It’s not the Australian way to toss people $2, to toss them a gold coin, and then ask them to work for a day,” Gillard said. “We support proper Australian wages and decent working conditions.”